In Memory of Deanna Dawn

I first met Deanna when Ken and I moved to California to study pumas in the "back-country" of San Diego County. She was eager to learn everything she could and gamely spent some time tracking the pumas for us while we took a short trip out of state. Her continued dedication to the profession (including a M.S. degree from San Jose State in 2002) made her a likely choice to help co-found a new organization - WFA, in 2006. She became involved in many aspects of the association, but I think she was most proud of her involvement with the Wild Felid Legacy Scholarship Committee. As a committee member, Deanna helped determine each year's scholarship recipients... and at the time of Deanna's passing, WFA had already awarded 8 scholarships! Now Deanna is one of the scholarship's honorees. We are deeply saddened by Deanna's untimely passing, but I know she would be pleased to be honored in this way... and that she was helping to encourage upcoming biologists, managers and conservationists to be better stewards of our amazing planet and only home.

If you would like to donate to the Wild Felid Legacy Scholarship to honor the memory of Deanna Dawn, click on the link below.
We use PayPal's secure server so donating is safe and easy. 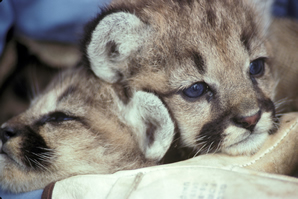