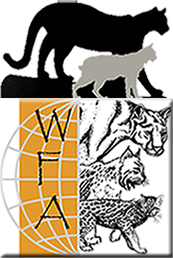 If you want to learn more about becoming a student rep for WFA, click here > 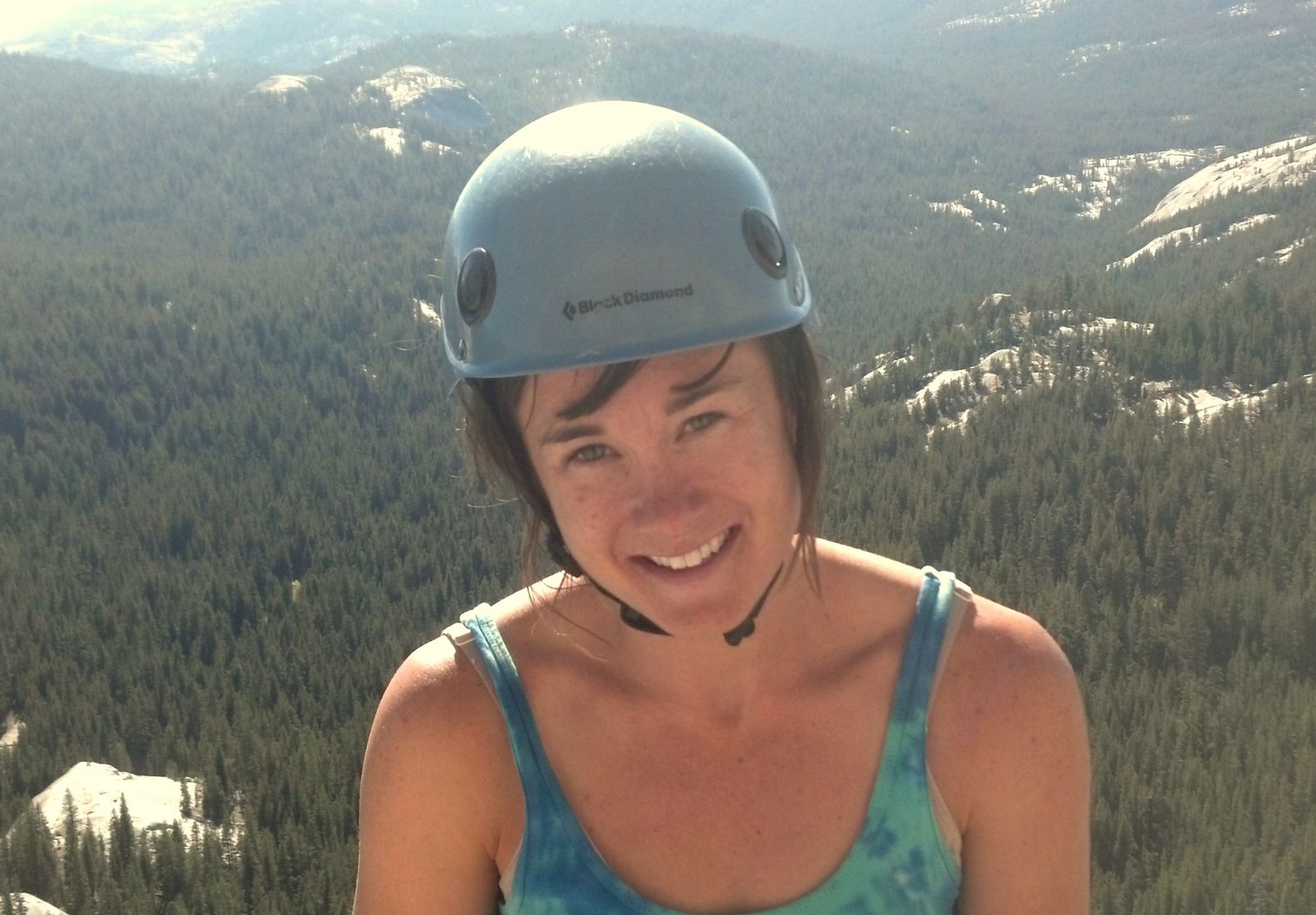 2015 - . Sarah Hegg grew up in Minnesota and received a bachelor’s degree in Natural Science and Environmental Studies from the College of St. Benedict (St. Joseph, Minn.). After graduation she moved westward and has lived in New Mexico, Wyoming, and California. She worked for many years bouncing around as a seasonal wildlife technician, mainly for the US Forest Service. She’s also worked in many other capacities (trail crew, wilderness ranger) and organizations (National Park Service, US Fish and Wildlife Service, Utah State University, Wildlife Conservation Society). Sarah has been lucky enough to work with many different wildlife projects; participating in research year-round involving grizzly bears, lynx, coyotes, wolves, wolverines, fisher, and marten. Sarah is currently working towards her MS, attending the University of Nevada, Reno. At UNR, she is studying population ecology and working with small mammals in the Great Basin of Nevada.  When not outside for work or school, she enjoys doing anything that gets her back outside; this usually involves running, skiing, or rock climbing. 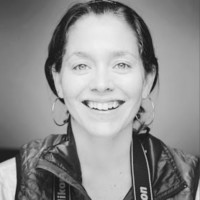 Marianela Velilla, MS., is a Paraguayan Biologist from the National University of Asuncion with a Master's degree in Wildlife Ecology and Conservation from the University of Florida as a result of a Fulbright scholarship. She also holds a graduate degree in Management and Conservation from Spain and has an Economics tools for Conservation at Stanford University. Currently, she is a PhD student at the School of Natural Resources and the Environment at the University of Arizona, where she will be developing her dissertation focusing on jaguar-human conflicts. She is an an Associate Researcher and co-pi of the Jaguar program at one of Paraguay leading NGO´s for biodiversity conservation. Velilla, is a Category One PRONII Researcher (National Researcher Program-CONACYT-Science and Technology Council of Paraguay), known from her work related to jaguar ecology and conservation in the Chaco of Paraguay. She is a cofounder of SAITE, a Wildlife Research Institute in Paraguay. She has ten years of experience working with various conservation related issues, working in several wildlife research programs with local NGO´s and Universities 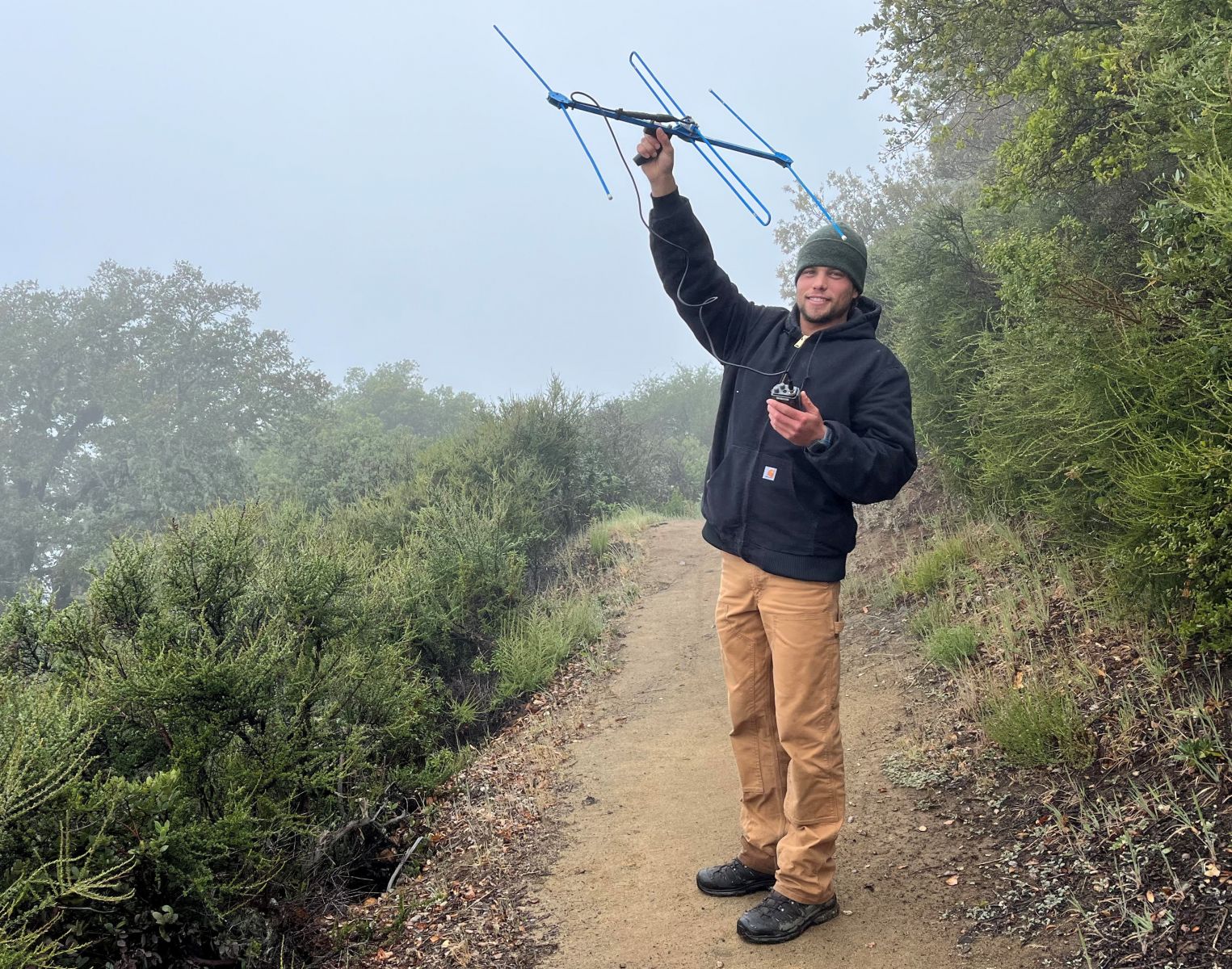 John Morgan is a PhD student at the University of California, Santa Cruz where he studies the effects of human activity on mountain lion ecology in the Santa Cruz Mountains. Using a combination of GPS collars and camera traps John is interested in understanding how human disturbance affects mountain lion space use, and how these effects scale up to affect population dynamics and community interactions. John is also working to develop alternative, non-lethal management strategies to reduce human – carnivore conflict. Prior to his PhD work, John earned a B.S. in Biology from the University Maryland, College Park. He then worked for several years as a field biologist, studying a broad range of topics including disease dynamics in Panamanian frog populations, the effects of invasive species on Hawaiian freshwater fishes, and jaguar population dynamics on Colombian ranchlands. John’s current work aims to inform carnivore conservation and management and promote human-carnivore coexistence in multi-use landscapes. 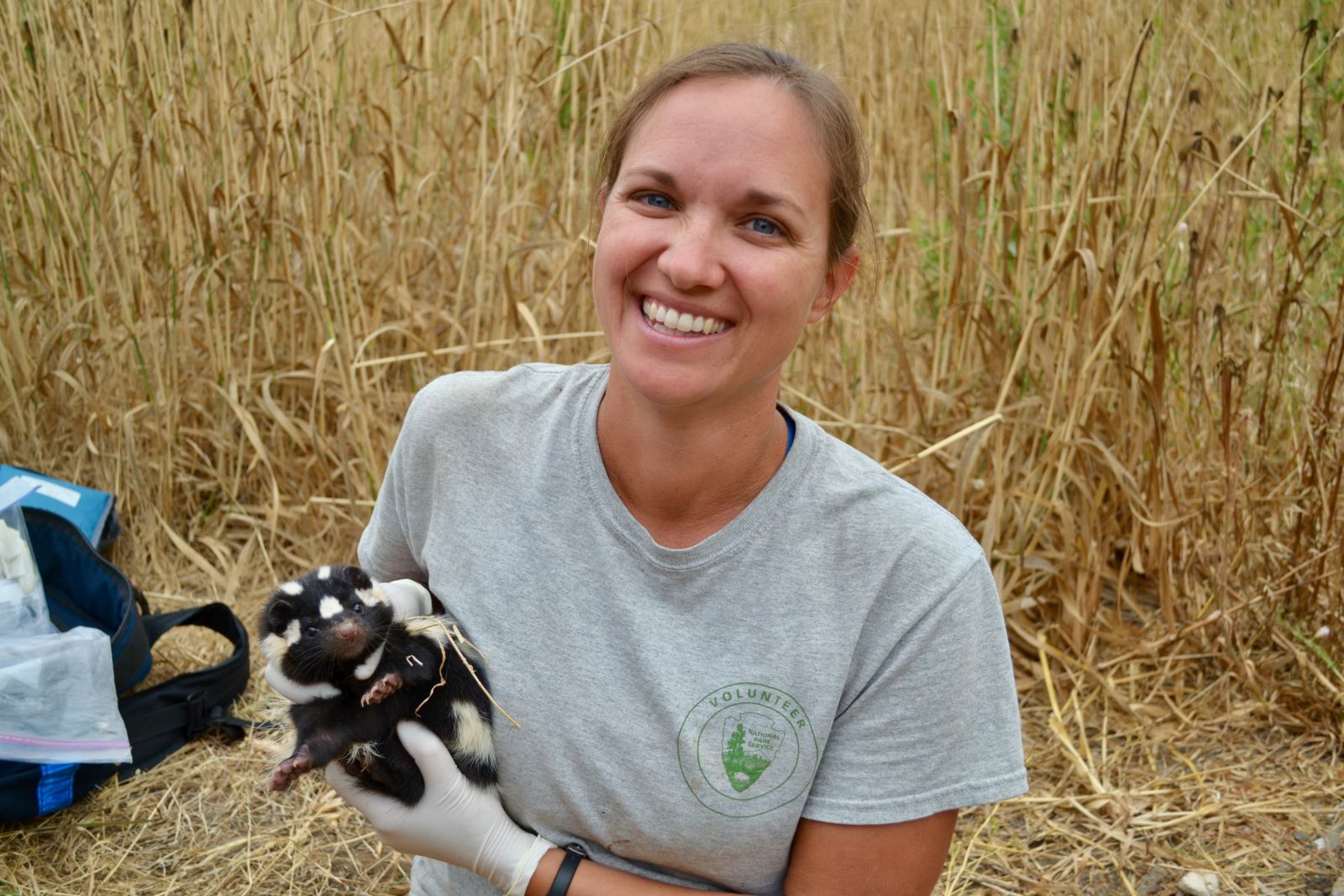 Ellie Bolas earned a double major BA in environmental studies and religious studies from the University of North Carolina at Chapel Hill, is completing a MS in Ecology at the University of California, Davis, and will begin her PhD in the same program in the fall of 2019. Her master’s research takes place on the California Channel Islands, and investigates the historical biogeography and population status of island spotted skunks, as well as their ecological relationships with island foxes. Ellie’s PhD will focus on predator-prey relationships between mountain lions and mule deer in urban and fire-prone ecosystems in the greater Los Angeles area. Outside of research, Ellie has worked extensively in science education and is an advocate for expanding diversity and equity in science and public access to engagement in research. 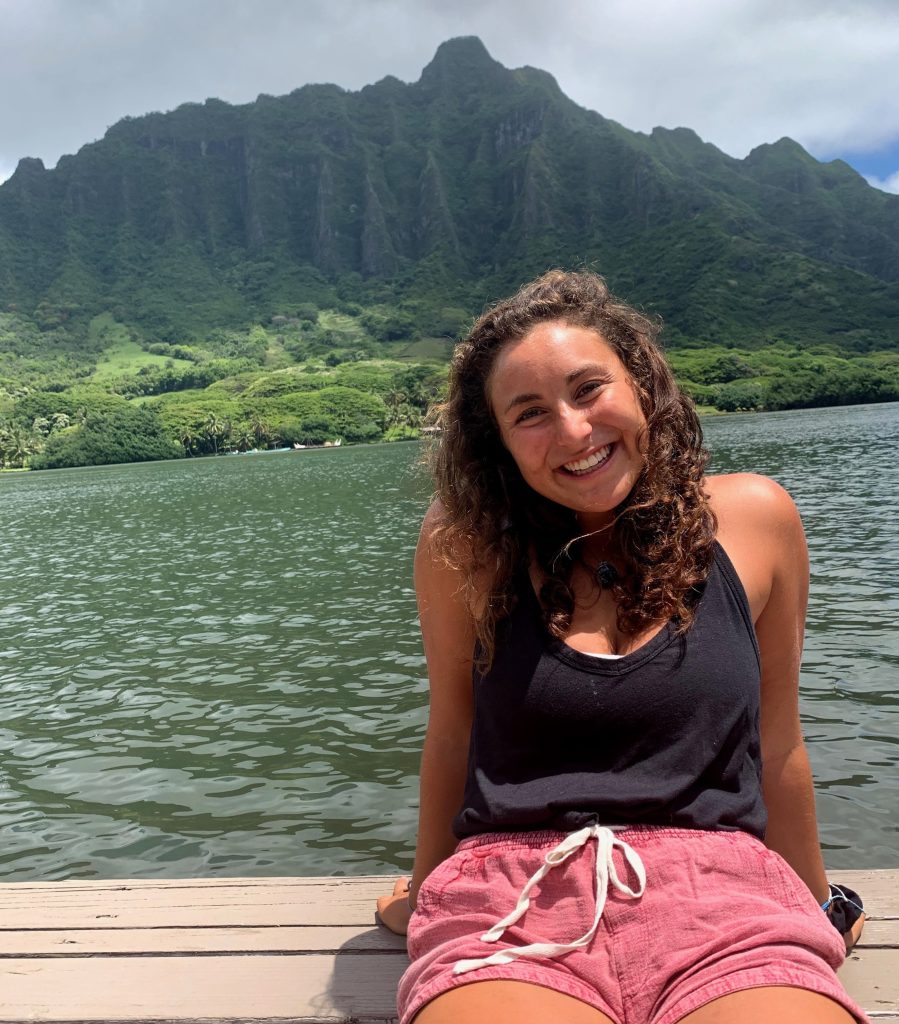 Erin Weingarten is a PhD student in the Graduate Degree Program of Ecology at Colorado State University. Erin received her B.S. from Duke University in 2018 in Biology, Evolutionary Anthropology, and Marine Science. She has worked in Panama, Turkey, South Africa, Swaziland, Kenya, Sumatra, and Hawaii. Her research interests center around human/wildlife coexistence, behavioral ecology, and spatial ecology. She is also passionate about technology in conservation and engaging with people through a lens of action oriented, community-led ethical research. Erin is currently working on a project in Botswana to use AI for real time monitoring of African elephants and is partaking in efforts with human/wolf coexistence in Colorado. For her PhD, she is also exploring topics related to social justice, ecology, and academia. 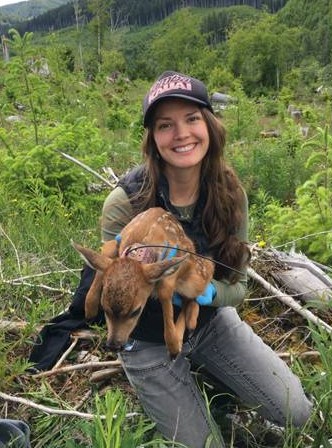 Cameron is a PhD student at the University of Idaho under Dr. Lisette Waits and in collaboration with the Lower Elwha Klallam Tribe and Panthera. She is a member of the Lower Elwha Klallam Tribe in Port Angeles, WA and her graduate research examines cougar and bobcat population genetics and ecology in her Tribe's historic use area. She is using a combination of non-invasive genetic sampling (scat found using scat-detection dogs), GPS collars, and remote cameras to estimate population sizes, interactions, and movement and dispersal patterns of these two felid populations. A goal of the Olympic Cougar Project is to support connectivity research and test model outcomes with real data. 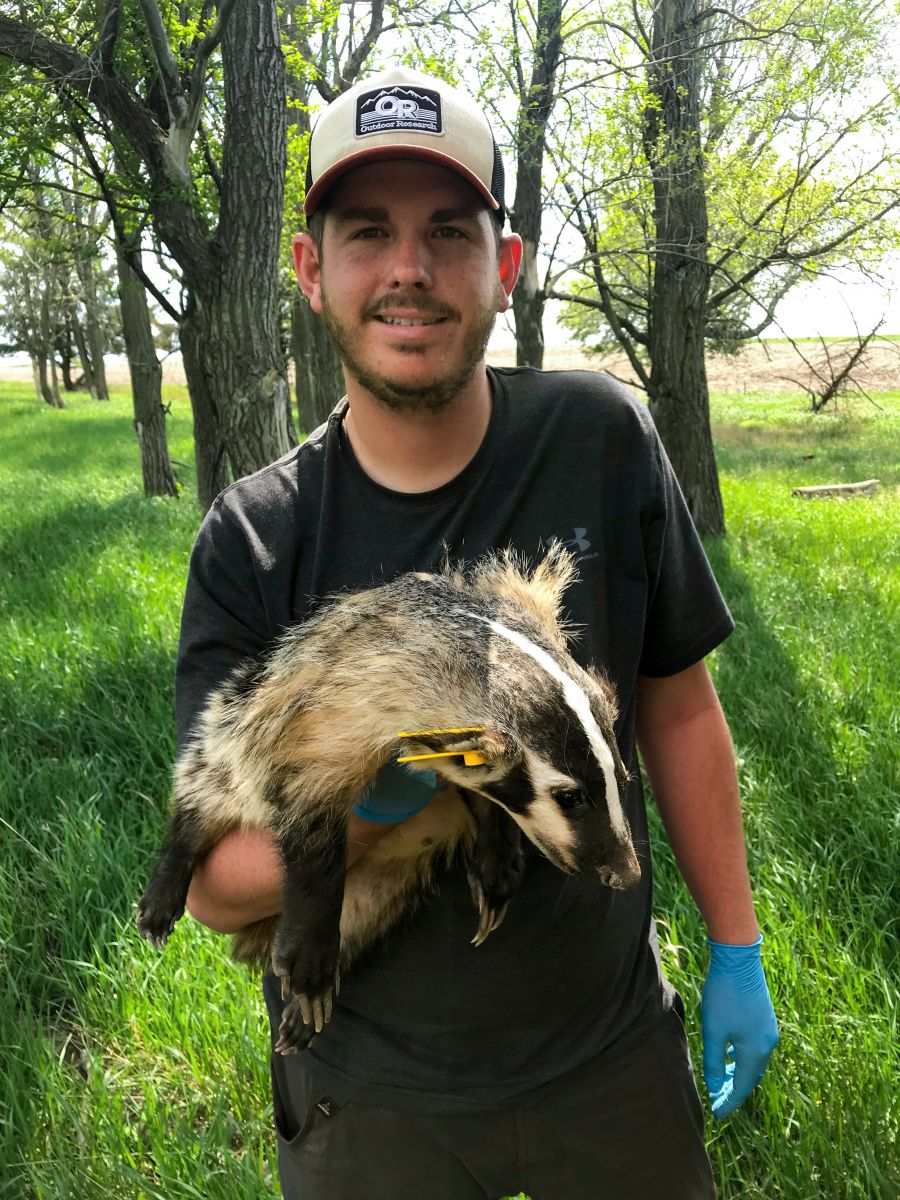 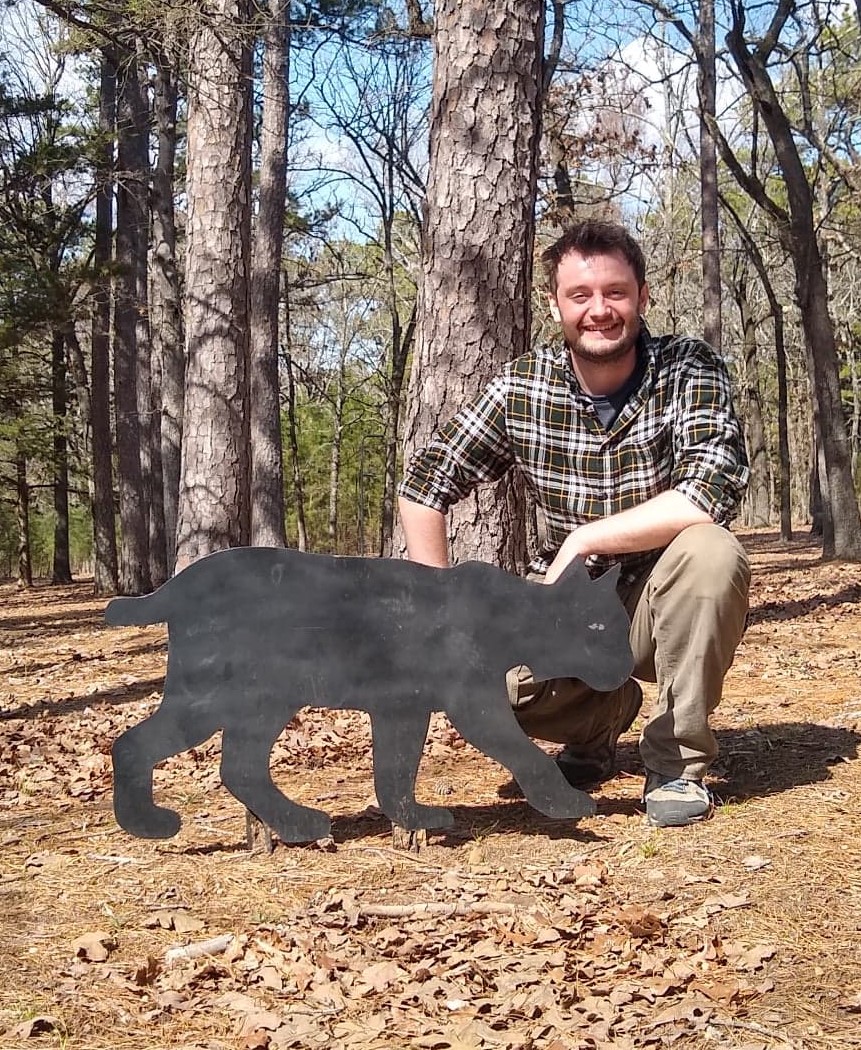 Nathan Proudman is a PhD student in wildlife ecology and management at Oklahoma State University. He currently studies numerous components of bobcat ecology, their population trends, and abundances, in the state of Oklahoma. His research involves both citizen-science-derived occupancy data collected by student volunteers, and genetic capture-recapture studies in three areas of specific interest, using a combination of non-invasive methods. Originally from South Wales in the UK, Nathan received his bachelor’s degree in Biology from Bath Spa University in 2015. As part of his undergraduate research, and in collaboration with the research group Operation Wallacea, he studied niche separation in sympatric primate species in the Pacaya-Samiria National Reserve, Peru. Nathan obtained his master’s degree in animal ecology from Lund University, Sweden in 2018. His MS research focused on the behavioural responses of red deer to human hunters and wolves in the Białowieża Forest, Poland, and was conducted in co-operation with Polish Academy of Science’s Mammal Research Institute. He moved to the USA in the summer of 2018 to commence his doctoral studies. Since 2019, Nathan has been the ‘student at large’ for the Central Plains Society of Mammalogists. 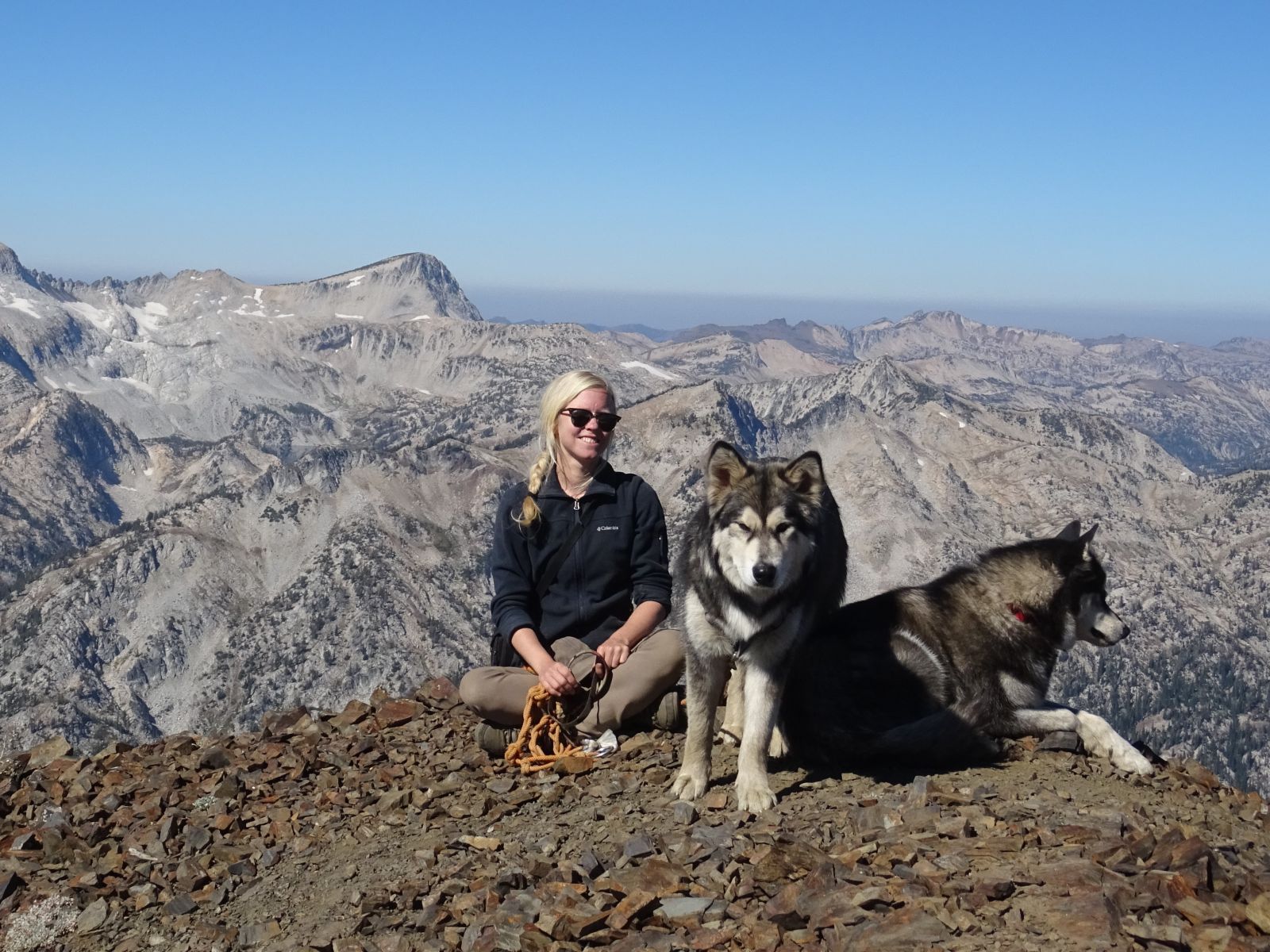 Charlotte Eriksson is a PhD student in Wildlife Science under Dr. Taal Levi at Oregon State University. Her research interests broadly involve developing and applying noninvasive genetic methods to conservation efforts and carnivore ecology research. Originally from Sweden, Charlotte received her B.Sc. from University of Sydney (2012) followed by 2.5 years of field work across Australia. She obtained her M.S. in conservation biology at Lund University, Sweden (2016). Her current research involves a diversity of species and locations including bobcats, cougars, coyotes and black bears in northeastern Oregon, brown and black bears in British Columbia, wolves in southeast Alaska and jaguars in the Pantanal wetlands of Brazil. 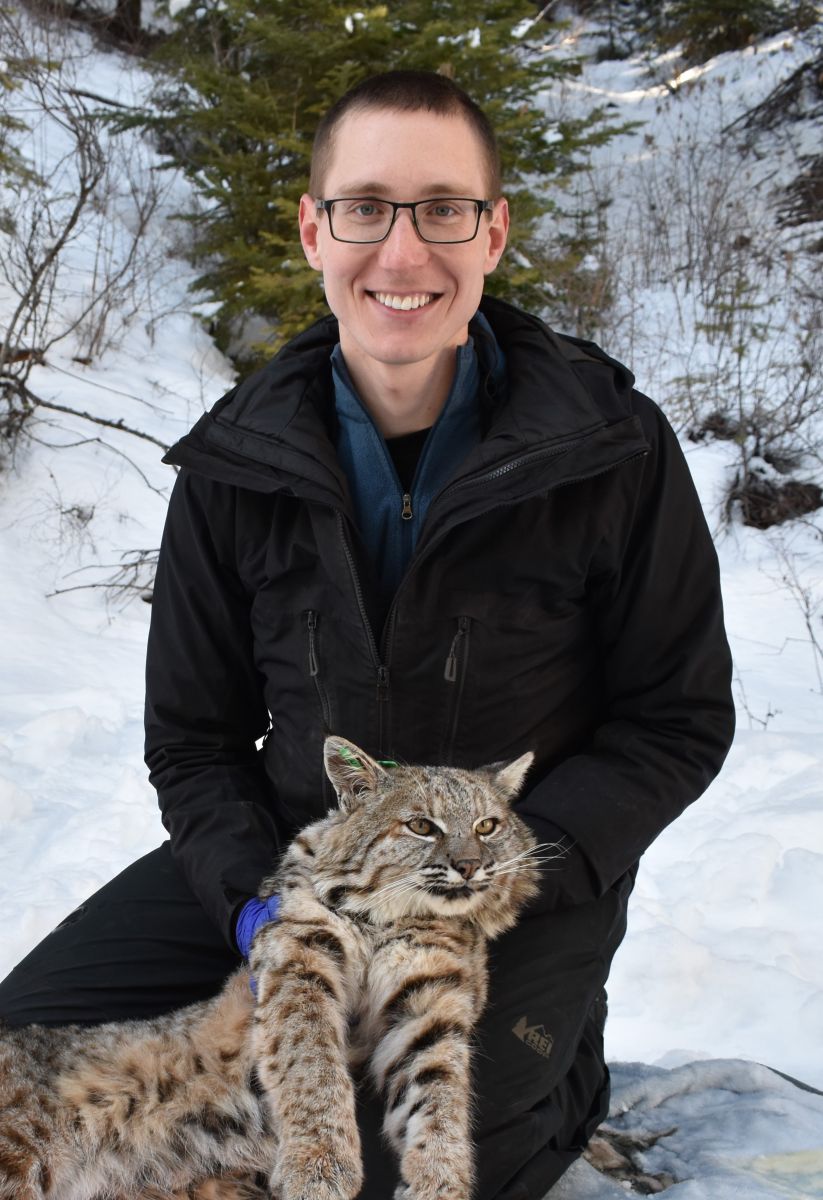 Zachary is a research associate and MS student in the Caesar Kleberg Wildlife Research Institute’s Feline Research Program at Texas A&M University, Kingsville. He is working with a team of researchers to study wildlife crossing use by ocelots, bobcats, and other species as well as the effectiveness of crossings and mitigation structures in reducing wildlife road mortality. His master’s research focuses on estimating bobcat population density in South Texas and examining how ocelot occurrence is related to mammal and bird diversity. Zachary is from southwestern Pennsylvania and received a BS in Environmental Science from American Public University. Prior to entering the wildlife field, he served four years in the US Air Force working in geospatial intelligence and remote sensing. Zachary has assisted with university and agency wildlife research across the US, focusing on carnivore ecology and predator-prey ecology. He has done field research on multiple carnivore and ungulate species using a variety of techniques and is Level III certified in Wildlife Track and Sign by CyberTracker Conservation. 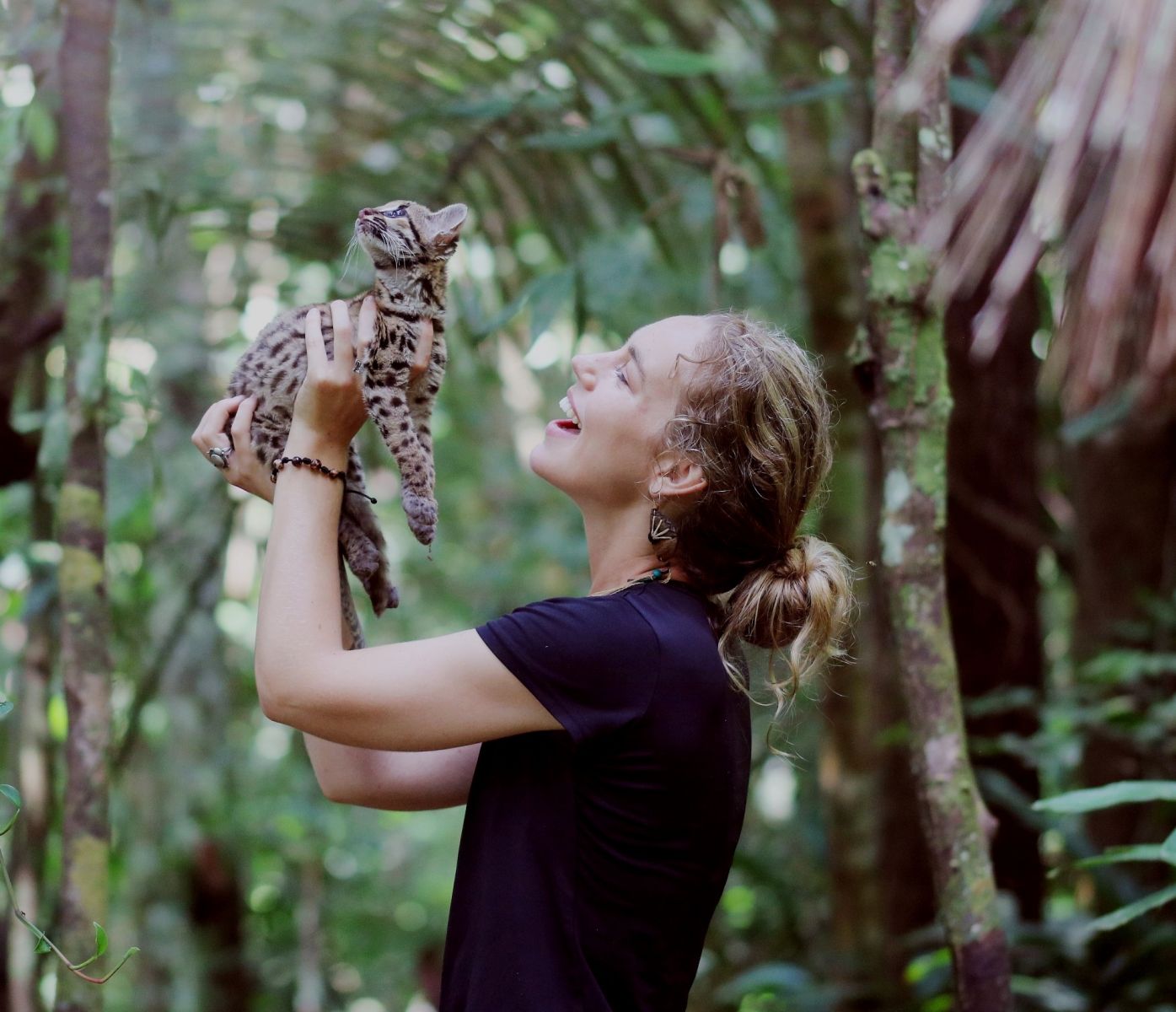 Samantha Zwicker is completing her doctorate in the Quantitative Ecology Laboratory at the University of Washington, Seattle. Her current doctorate and nonprofit research is being undertaken in the lower Peruvian Amazon and involves: assessing the effects of land use change on felids and their prey using camera trapping; estimating densities of regional jaguar and ocelot populations; investigating interspecific competition and spatiotemporal overlap between sympatric carnivores; and creating protocols for reintroducing felids to the wild. Sam is also the founder of conservation nonprofit Hoja Nueva and cofounder of wildlife sanctuary Wild World Initiative in Peru. Sam was a Wild Felid Legacy Scholar in 2019 for her project investigating felid diets and felid spatiotemporal overlap in the Madre de Dios region of Peru. She also received an NIH Global Health scholarship in 2017 and became a Panthera Grantee in 2020 to better investigate the smaller, more elusive and often arboreal felids of the Amazon rainforest. Sam received her bachelor’s with honors from the University of Washington's Program on the Environment in 2012, her master’s in wildlife ecology in June of 2015, and a degree in Nonprofit Management in 2016. 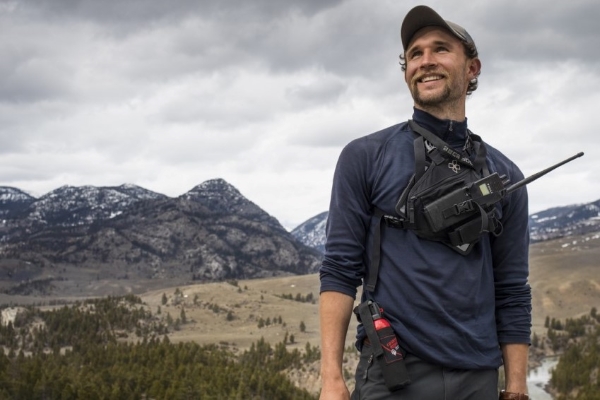 Connor grew up in western Washington where he gained an appreciation for the outdoors while bouncing between the Cascades and Puget Sound. After graduating from the University of Washington with a degree in wildlife conservation he spent six years gaining experience in wildlife research. During that time he was lucky enough to engage and work with many projects and study systems including snowshoe hares, salmon and mountain lions in Washington, snow leopards and wolves in eastern Kyrgyzstan, and spent a bulk of the last five and half years understanding predator prey dynamics and the ecology of wolves and mountain lions with the Yellowstone Wolf and Cougar projects. Connor began his PhD in fall of 2021 at the University of Montana in the Ungulate Ecology Lab, studying factors driving migration switching in the Ya Ha Tinda elk herd. When not in the office or the field, Connor can be found attempting to stave off injury while running, hiking, biking and skiing.